Howard University School of Divinity is one of the very few theological schools in the United States connected to a Doctoral University with High Research Activity. It is one of only six (6) Historically Black Theological Institutions (HBTI's) accredited by the Association of Theological Schools (ATS).

The School offers an unparalleled educational experience that not only reflects the African-American cultural and religious tradition, but also the foundations of excellence promoted throughout Howard's history and the unique opportunity afforded by its location in the nation's capital. Upon graduation, HUSD students are well prepared for pastoral ministry, university, hospital and military chaplaincies, teaching, social justice & public policy advocacy, lay ministry & leadership, or research vocations. We invite you to explore your questions and pursue your calling with us as we fulfill our mission as a graduate theological and professional school that educates and forms academic and religious leaders to serve the Church and society, and celebrates the religious and cultural heritage of African Americans, the African Diaspora, and Africa.

HUSD is recognized nationally as a seminary that is changing the world.

HUSD traces its origins and orientation towards social justice back to the Africans (Mende) who resisted captivity aboard the Amistad schooner and the New England Congregationalists who established the American Missionary Association (AMA), an abolitionist organization, shortly after their successful advocacy for their freedom and repatriation.

In 1866, a group of Congregationalists met in Washington, DC, during a prayer meeting, to discuss the training of religious leaders to meet the spiritual needs of newly emancipated African Americans. Their initial plan to teach religion was broadened to include the liberal arts and professional education.

In 1870, three years after the opening of Howard University, the academic unit for theological education was established, and in 1938, fully accredited by the Association of Theological Schools (ATS). During HUSD's history, it has gained an enviable reputation for its distinguished faculty and graduates who have been making a great impact in their communities, the nation, and the world.

From HUSD's very beginning, women played an integral part in the School's history.

The first female graduate was Bell J. Conrad, who received the Bachelor of Divinity (B.D.) degree in 1921. She was preceded by Ruth Haven and Elnora Carter, who completed the certificate and diploma programs, respectively. In 1969, when HUSD changed its B.D. to the M.Div. (Master of Divinity), Delores H. Carpenter was the first woman recipient of this degree.

As one of Howard University's 14 schools and colleges, HUSD enrolls students from diverse backgrounds and denominations in pursuit of the Master of Arts (Religious Studies), Master of Divinity, and Doctor 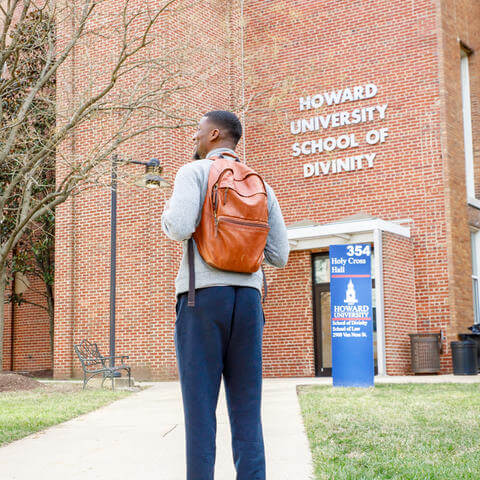 Howard University School of Divinity, a graduate theological and professional school, educates and forms academic and religious leaders to serve the Church and society, and to celebrate the religious and cultural heritage of African Americans, the African Diaspora, and Africa.

Howard University School of Divinity seeks to be a global leader in theological education in a community driven by intellectual rigor, a passion for justice and freedom, and a relentless search for truth.